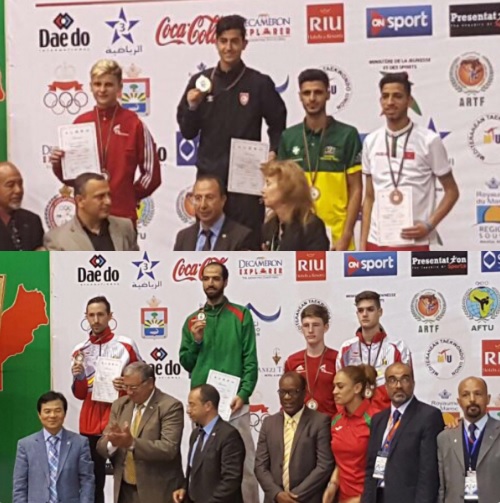 Max Cater came up just short in his attempt to secure a gold medal for GB Taekwondo at the President’s Cup in Morocco.

The 19-year-old Manchester based fighter faced Tunisia’s Hedi Neffati in the final of the -58kg competition.

After three exciting rounds the finalists were deadlocked at 20 points-all. That sent the contest to sudden death and it was Egypt Open champion, Neffati, who came up with the decisive hit.

The Doncaster born prospect, 18, defeated opponents from Tunisia, Morocco and Mali before facing Spaniard Jose Rosillo Atencia in the semi-finals.

Another contest took place but it was Rosillo Atencia who defeated the 2015 European Cadet champion, 10-8, before losing the gold medal match to Faical Saidi of Morocco.

Liverpudlian Josh Calland reached the quarter-finals of the -63kg event before losing to Croatia’s eventual bronze medallist, Lovre Brecic, Ben Haines went also went down in the quarter-final stages but in the -74kg competition to Brecic’s compatriot, Tom Kanaet while Christian McNeish suffered a first round exit to Jordan’s Anas Aladarbi at the same weight.